What should happen to the area between Karolina and Lower Vítkovice? Come and see a debate at the Gong! - Fajnova Přeskočit na obsah
Publikováno 13.6.2022
Sdílení

What should happen to the area between Karolina and Lower Vítkovice? Come and see a debate at the Gong!

At 6 p.m. on 15 June, the Gong auditorium in Lower Vítkovice will host a debate featuring architects (Josef Pleskot, Roman Koucký, Tomáš Ctibor) and City representatives, who will discuss the future development of the area between Ostrava city centre and Lower Vítkovice.

The City is keen to consolidate ownership of all the land between Karolina and Lower Vítkovice, making it possible to breathe new life into this largely disused industrial area. The area occupies a prominent and strategically important location within Ostrava, so it is an ideal site for the creation of an entire new urban quarter.

Topics to be discussed at the debate include how to address the current lack of connections between the two areas, what type of development will be appropriate for this key brownfield location (as well as the adjacent Černá Louka site), and whether it is viable to build a new city quarter there.

The debate is aimed at the general public. 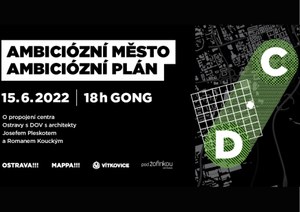 City Assembly gives green light to the “Sitte Palace” development by approving the sale of land on Macharova St.