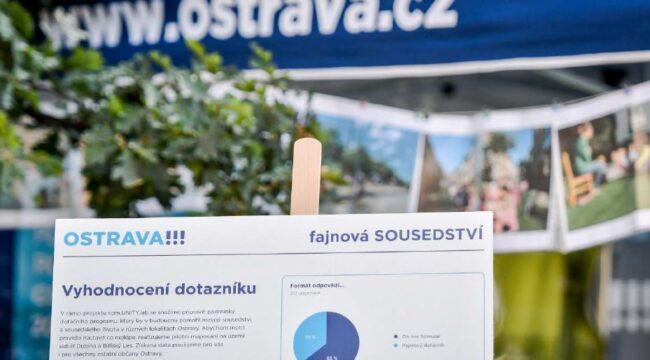 Thanks to the international URBACT programme, Ostrava has been able to join a network for sharing experience among partner cities. As part of the Com.Unity.Lab project, the city is studying tried-and-tested practices that have been applied by the Portuguese capital Lisbon in the form of an integrated approach to urban planning and management challenges connected with socially disadvantaged areas.

This is not the first time that Ostrava has taken advantage of the URBACT network to support its activities. Two successful projects previously implemented via the network (Refill and In Focus) have shown us that community-based initiatives such as these are complex and multi-faceted, and the Com.Unity.Lab project is no exception.

The URBACT network enables partners to share tried-and-tested approaches and practices. The project focuses on developing and improving models for cooperation between local communities and municipal authorities in priority urban areas. Com.Unity.Lab draws inspiration from the experiences of Lisbon, and brings together cities from all over Europe: Lisbon (PT), Aalborg (DK), Bari (IT), Lille (FR), Lublin (PL), Ostrava (CZ), Sofia (BG), and The Hague (NL).

During the past decade, housing estates in Czech towns and cities have faced a number of social, economic and urban planning-related challenges and problems, and local communities’ satisfaction with their living conditions has worsened. Ostrava is no exception. Many formerly state-owned apartments on Czech housing estates were sold to private buyers following the Velvet Revolution in 1989. This has meant that municipal government bodies no longer have any way of influencing rent levels or the quality of housing on such estates. These urban areas are becoming increasingly anonymous, and community life is dwindling. Ostrava’s municipal authorities have observed the emergence of a wide and complex range of problems in the city’s housing estates, and we know that we need to take the necessary action to address this situation – yet we are also well aware that this will be a relatively lengthy and costly process, and one that needs very careful planning.

“Local communities can play a key role in improving the areas where they live, especially by developing places to meet and spend their free time in the company of their neighbours.”

In the first phase of the Com.Unity.Lab project, the priority was to map the current situation. One of Ostrava’s largest housing estates – covering the Dubina and Bělský Les areas of the city – was chosen for this purpose.

Dubina is currently perceived as a less desirable location for living; this pushes down the market value of apartments in the area and makes it difficult to sell them for a reasonable price. Lower rent levels lead to a lack of stability in the resident population and mean that the local community consists mainly of seniors, single-parent families, families in a precarious financial situation, or members of the Roma minority community.

The project team spent several days “on the ground” carrying out field research in Dubina, during which they collected data from respondents in various social and age groups. More information about the findings of the survey can be seen HERE.

The project team in Ostrava assessed the overall goals of the Com.Unity.Lab project and identified the most readily achievable objectives, which offered the strongest potential for the involvement of local communities: the simplification of community life and support for the organization of community activities. A range of stakeholders can become involved in working towards these goals: individuals, housing associations, non-profit organizations, schools, sports clubs, and various other institutions that are active in the local area.

Existing grant schemes run by the City (such as its public space improvement programme or participative Municipal District budgets) offer plenty of inspiration, but none of them are specifically focused on supporting the development of community life via soft projects and small-budget activities. For this reason, it will be essential to create a new grant scheme tailored specifically to the needs of Com.Unity.Lab; this new scheme will be coordinated with existing grant programmes, and it will be targeted at community projects – not only in terms of the sums available per project, but also thanks to a fast-track administrative process. The City of Ostrava (in conjunction with the Ostrava-Jih Municipal District) plans to launch this new scheme from 2022, and the Dubina and Bělský Les housing estates have been chosen as the pilot area where these community activities can be tested in practice.

If the piloting phase proves successful, local communities will be able to play an active role in designing and implementing projects that will help drive broad-based improvements in a district which suffers from negative perceptions and where local inhabitants do not always feel secure. Of course, projects such as these are not a cure-all, and they cannot be expected to achieve their overall goals without synergies generated by major investment projects and top-level support from the City’s management. Nevertheless, mutual interaction will certainly boost the effectiveness of all project-related activities.

The Com.Unity.Lab project is co-funded by the European Regional Development Fund (ERDF) as part of the URBACT III operational programme. For more information see https://urbact.eu/comunitylab or Facebook: @com.unity.lab

Com.Unity.Lab final report to download as a PDF file