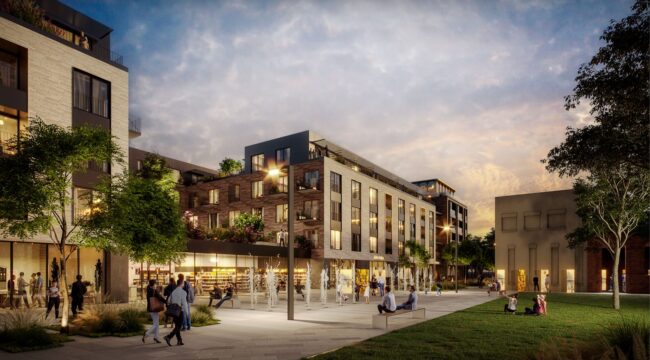 Ostrava is entering into negotiations on the sale of the real estate complex known as “Rezidence Stodolní” in the city center. The investor is Linkcity Czech Republic a.s. The decision was taken by the City Council on 11 January after evaluating the two bids received. Representatives of the City will now discuss the contract of sale, finalize the timeline for the planned development, and agree on all the associated terms and conditions. The draft contract will then be discussed by the City Assembly at a session probably in March or April.

The winning bid was accompanied by an outline of the investor’s plans to build high-quality new structures which will be visually impressive while also sensitively developing a disused lot in the densely built-up central part of Ostrava. The investor intends to create a multi-functional building, which will comprise an apartment complex, leisure/recreation facilities, and commercial units at street level. The bid price was 24 020 000 CZK (with the standard VAT rate).

Ostrava’s Mayor Tomáš Macura gave more details: “The bid fits well into the overall context of the location and its urban life – and it is sensitive to the site’s history. It will create a multi-storey building of high architectural quality in the central part of the city, respecting the unique genius loci of the nearby historic slaughterhouse complex. It will provide high-quality residential units as well as excellent leisure/recreational facilities in the heart of Ostrava. In addition to commercial units, there will also be 158 apartments with their own parking spaces. The proposals represent a worthy addition to the urban fabric – enhanced further by the outstanding quality of the architecture, which will be entirely in harmony with the site’s history.” 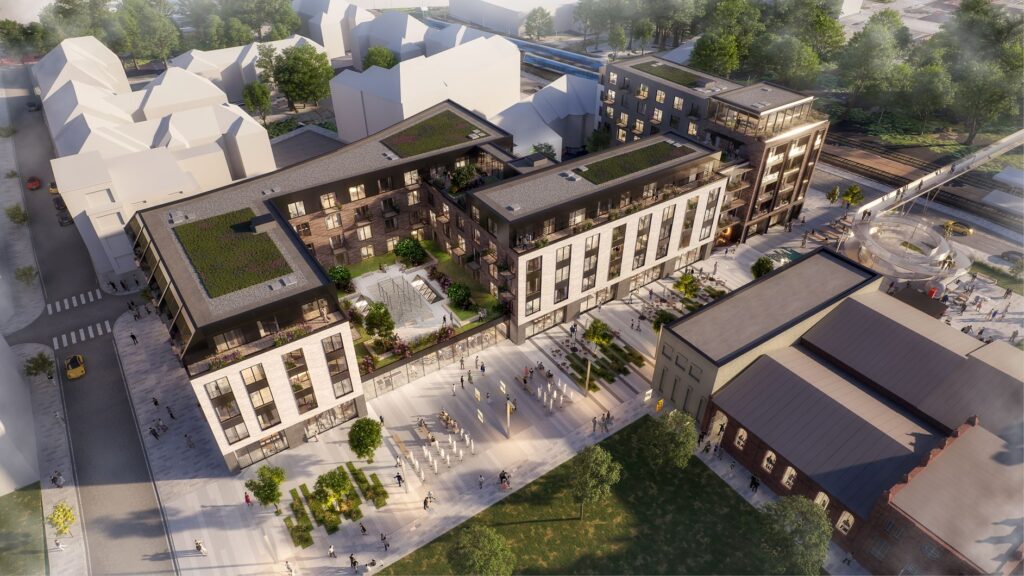 The “Rezidence Stodolní” complex, designed by Bogle Architects, was inspired by the architecture of the nearby historic slaughterhouse, currently being revitalized to create a contemporary art gallery; it will offer modern living imbued with the atmosphere of industrial architecture. The plans respect the distinctive character of Ostrava’s city center and are fully in keeping with their surroundings. At ground level facing onto Stodolní, Masná and Porážková Streets there will be commercial units; the developer expects these to include a pharmacy, a bakery, other shops, a doctor’s office, a café, a restaurant, etc. The façade will reflect and echo the material structure of the nearby historic slaughterhouse complex, thus bringing visual coherence to the entire quarter. There will be communal areas adjacent to the park sections of the slaughterhouse.

The investor’s plans emphasize the communal garden areas, which will consist of two open courtyards. The western courtyard (featuring greenery) will be semi-public; besides being open to residents, there will also be access for visitors to the commercial units, restaurants, and cafés, and the courtyard will offer views of the revitalized slaughterhouse. The eastern courtyard will open onto a planned park area at the slaughterhouse complex; it represents a natural continuation of the park, but it will only be accessible to residents. There will be a green roof which will include children’s play facilities, a workout zone, and a relaxation area giving views over the slaughterhouse. The greenery will create a pleasant microclimate as well as help to retain rainwater, which will be channeled into a retention tank.

The design is the work of the renowned Bogle Architects studio, which has been operating in the Czech Republic since 2007. The studio has already completed a number of successful projects in Prague, including the award-winning Villa Vokovice development, and it is currently working on several major projects in Bratislava. Other projects by Bogle Architects include a private spa resort in Croatia, and the London and Hong Kong branches are involved in a range of innovative projects around the world – such as schools in Dubai, Vietnam, and Singapore as well as residential developments in Porto, Bogotá, and Moscow.

Clément de Lageneste, the CEO of Linkcity Czech Republic, commented on the planned cooperation with the City of Ostrava: “We appreciate the approach that the City is taking to Ostrava’s future development. Its emphasis on revitalizing brownfields and injecting new life into disused locations (reflecting the need for sustainable development) is entirely compatible with our vision of what development should be. We are therefore delighted to launch cooperation with the City at Stodolní Street – a location that has great symbolic value. I am confident that we will be able to co-create a project whose outstanding quality will contribute to the revitalization and ongoing development of the entire area.” 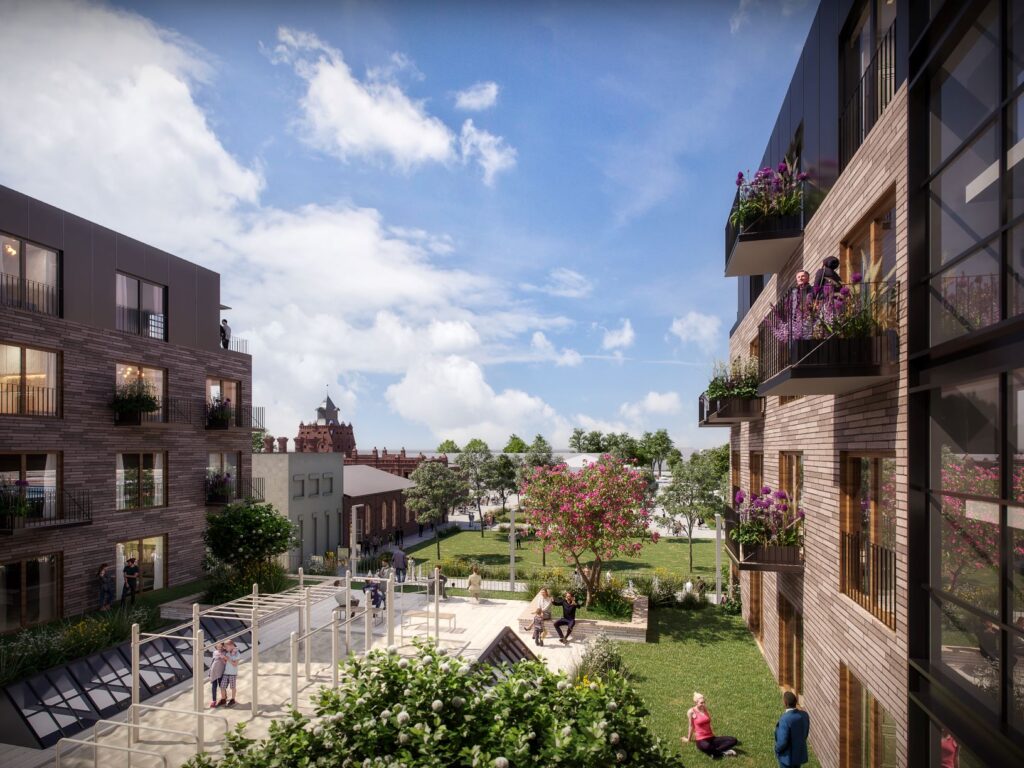 Ostrava’s City Assembly approved the plans to sell the site at its session on 15 September 2021. Interested parties had until the end of November to submit their bids and development plans for the site. The entire quarter is currently being transformed by an ongoing process of reconstruction and revitalization, all coordinated via the regulating conditions set out by Ostrava’s Municipal Studio for Urban Planning and Architecture (MAPPA).

The City received two bids for the site by the stipulated deadline. The other bid was submitted by PROMET COMMERCIAL s. r. o., which planned to create a multifunctional building with commercial premises, apartments, a garage and a hotel. However, these plans did not comply with the conditions set by the City in its call for proposals; the structure of the planned complex meant that the bid had to be rejected.

Linkcity Czech Republic a.s. is an international development brand of the Bouygues Group. It operates in the Czech Republic as part of the VCES construction group. Linkcity is a developer and project investor that utilizes global strength in combination with local experience. It implements projects revitalizing urban brownfield sites for mixed-use, such as Tesla Pardubice, Rezidence Radotín, and more. It also specializes in industrial projects, hotel developments, as well as bespoke projects customized to clients’ individual requirements. Its developments emphasize urban functions, sustainability, and renewable resources. Linkcity’s current projects include the transformation of the former Tesla factory in Pardubice to create a new residential quarter with 250 apartments, a supermarket, and 10 rows of townhouses, as well as the third phase of the Chrudimpark residential project.