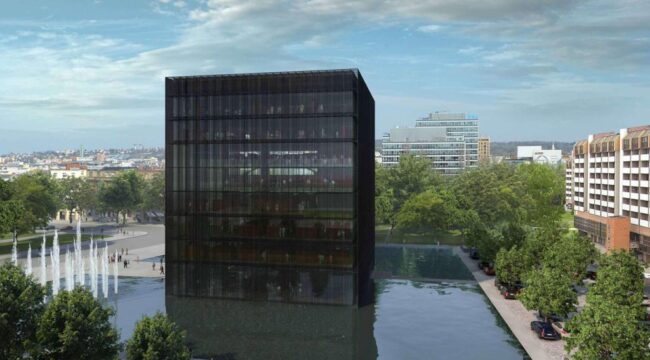 The Black Cube: From coal mining to data mining

The planned building in Ostrava nicknamed the “Black Cube” will not only provide new premises for the Moravian-Silesian Research Library; it will also serve as a hub for the region’s digital transformation, supporting innovation and helping to implement the vision of a region-wide shift that can be summed up in the slogan “from coal mining to data mining”. A range of creative education and training programmes will keep experts and the general public up to date with the latest trends in smart technologies, library management, creative culture and environmental education.

These activities will help prevent a future rise in unemployment throughout the region by providing training for jobs involving digitalization and information management. The Black Cube will also create a number of new IT vacancies as well as training jobs (including student internships).

As well as being easily accessible by public transport, the Black Cube will also be a model example of energy efficiency thanks to its sophisticated smart control systems. It will incorporate a climate education centre, which will also provide energy consultancy services.

3 questions for the project team

How will the new library serve as a community centre for students, researchers and innovators?

The Black Cube aims to act as a polyfunctional community centre – not only for students, researchers and innovators, but also for the general public. We want to integrate the possibilities offered by the latest technologies, informal and lifelong learning, and cultural heritage into entirely new formats such as living labs and social labs. We also want to use this broad community and knowledge base as a platform on which we can create an environment where innovation will thrive. Our main priority is to foster innovation in the creative industry and creative culture.

What is the role of a digitalization centre?

Our state-of-the-art digitalization centre will facilitate the systematic and professional digitalization of extensive collections and document archives from the region’s memory institutions – as well as providing long-term storage and protection of the digital data. This will enable the complete digital transformation of culture in the Moravian-Silesian Region. The digitalized content will be presented in various forms – via digital libraries, digital collections, expanded virtual reality, virtual tours, and so on. All these options will be featured on a new regional cultural portal that will be developed for this purpose. There will be a particularly strong emphasis on industrial history and industrial heritage – which forms a key element in the identity of this former coal-mining region.

What will the Black Cube offer beyond what the current library provides?

There will also be study rooms for teams and individual users, multimedia teaching rooms, an experimental cinema, conference halls, exhibition spaces, a literary café, a night study room, and a number of study and relaxation zones throughout the building.