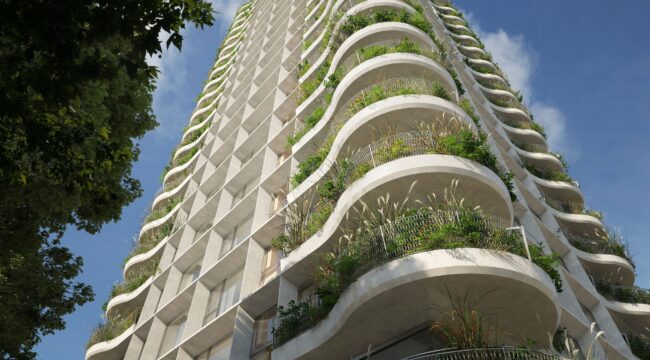 The renowned AI – DESIGN studio, headed by the architects Eva Jiřičná and Petr Vágner, has completed a detailed proposal for the reconstruction of a high-rise block in Ostrčilova Street, a major Ostrava landmark that is in poor technical condition and has remained vacant for several years. The proposal reflects the technical options that are available when redeveloping this long-discussed site; it preserves an important element of Ostrava’s architectural heritage while also bringing fresh new elements to the building. The redevelopment will create a highly attractive residential complex in the city centre, including a café with a panoramic viewing terrace on the top floor of the tower.

Ostrava’s Mayor Tomáš Macura explained the background to the project: “When we commissioned the project, we wanted to know whether it would even be possible to find a way of reconstructing the existing building while also making it a fully functioning part of the urban environment. Our first and most important task was to analyze the technical aspects of the structure, which had long been considered problematic: structural integrity, fire safety, floor height, and so on. The proposal itself was based on the findings of this initial analysis, and it will create a new, highly attractive, fully functional building with a fascinating history behind it.”

The “skyscraper”, as it is commonly nicknamed, will be stripped down to its structural skeleton. The asbestos panels will be removed, and a new central shaft will be installed, containing staircases and an elevator shaft; this will enable the building to comply with all modern fire regulations. Originally the building had 22 floors, but the chosen technical solution will enable an additional floor to be added; this new top floor will contain a café with a terrace offering breathtaking panoramic views of the city.

The majority of the building will consist of 76 newly designed apartments of various sizes, ranging from studio apartments to exclusive maisonette units in the upper floors. To ensure that the apartments feel light and spacious despite the relatively low ceilings, the design will feature fully glazed outer walls and balconies with greenery. The ground floor will contain commercial units covering a total area of 135 m² plus a reception and lobby area. The building will be completely barrier-free for people with reduced mobility, and the entrance will be directly accessible from the ground level.

Architect Eva Jiřičná explained the factors that her studio took into consideration: “Throughout the world we can find examples of post-war structures that were built with good intentions using the best technologies that were available at the time. Many of them have now outlived their usefulness, and although structurally they are still in an acceptable condition, the parameters of the apartments and façades no longer meet modern requirements. When considering what to do with these buildings, it is necessary to take into account various factors. Our task was to study the potential for adapting the existing block to ensure a continuation of its original role – to provide high-rise living – while also meeting today’s requirements in terms of quality, the regulatory framework, and environmental concerns. We collaborated with experts from various professions to produce this proposal which we are presenting for discussion.”

The proposal has been approved by fire safety officers and civil engineers, who have confirmed that the existing building is fundamentally sound. However, in order to remove any possible doubt, the structure is currently being monitored for oscillation and deformation; the results of this monitoring process will be integrated into the next phases of the project.

The project will create a substantial number of new apartments at a location that already suffers from a lack of parking capacity, so the redevelopment project will include the construction of a parking garage with a capacity of between 130 and 170 spaces. The garage will be used by the new residents as well as current residents in the vicinity. Several options are being considered for the location of the parking garage; it may replace the existing parking lot, or it may be located on the site of the current boiler room.

The redevelopment proposal was first presented on 20 January. The debate focused mainly on the wider urban context of the site and the historical value of the original building.

Ondřej Vysloužil, Director of Ostrava’s Municipal Studio for Urban Planning and Architecture (MAPPA), gave more details: “Changing the ‘face’ of such a prominent Ostrava landmark is a sensitive matter – all the more so when we consider the context of the other buildings in the vicinity, including the Jindřiška housing estate. The discussion brought to light numerous objections, mainly due to the substantial change in the appearance of the building – and of course such objections are entirely relevant. However, it is important to consider the fact that this new appearance will largely be a result of the proposed functional and technical alterations which will actually enable the building to be preserved at its original height. I am very pleased that we have had the opportunity to discuss the various arguments with experts.”

The City of Ostrava is now preparing for this next phase; a key step here will be to secure the involvement of a private investor. The planning documentation will be compiled in 2021 and 2022, and ideally the actual reconstruction could begin in 2023. The estimated cost of the redevelopment is 390 million CZK (including the parking garage).

The history of the building and the “Jindřiška” residental location

Ostrava’s “skyscraper” in Ostrčilova Street has been vacant since 2013 due to technical issues. Although it is in a poor technical condition and the reconstruction will present many challenges, the City has decided not to demolish the building but instead to preserve this 64-metre-high landmark. The only taller structures in Ostrava are the viewing tower of the City Hall and the Bolt Tower at Lower Vítkovice (a superstructure mounted on top of a historic blast furnace).

The “skyscraper” was built between 1965 and 1968 to a design by Jan Slezák in the late international style, as an experimental project forming part of the Jindřiška housing estate. It was originally designed as a residential building, but technical problems meant that it was only used as such for a few years; in the 1970s it was converted into an office block. Its ground plan is almost a regular square, and it has a fully glazed façade on the ground level.

In 1984, the Czech-born architect Eva Jiřičná founded her own studio, Eva Jiricna Architects Limited, in her home city of London. Since 1999 she has been the co-owner (with Petr Vágner) of the AI – DESIGN studio in Prague. Both studios offer a comprehensive range of services, including designs for new public and private buildings and public spaces, bridges, reconstruction projects and complete interior design concepts.

Buildings designed by Eva Jiřičná include the Congress Centre and University Centre in Zlín, an education complex for Tomáš Baťa University in Zlín, the Sněžka apartment block, the Josef Hotel in Prague, and a range of buildings in the United Kingdom: the AMEC headquarters, the entrance and reception area of the Victoria and Albert Museum, plus various residential buildings, retail structures, interiors and bridges in London and Kent. She has won numerous awards including the Order of the British Empire for design. She has been inducted into the US Interior Design Hall of Fame. She also holds honorary doctorates and professorships at several universities. In 2003 she was elected Chair of the Architectural Association in London.