The University of Ostrava is building a new multifunctional campus at the Černá Louka (Black Meadow) site, next to the Antonín Dvořák Theatre. The new campus will serve not only students, but also the general public. The City of Ostrava has made a generous contribution to support the new campus, and it is also implementing its own projects as part of the development. When complete, the campus will completely revitalize the Černá Louka quarter, transforming it into an attractive destination which will represent a major boost to the city centre as a whole. This ambitious project represents a milestone in the development of both the university and the city.

Construction work at the future campus is continuing, with a consortium of two companies (the Ostrava branch of IMOS Brno and the Třinec-based building contractor Beskydské stavební) having won the tender.

The City of Ostrava donated land worth around 42 million CZK to the University of Ostrava as the site of the campus, which is in a highly lucrative and attractive city centre location. The City will also pay for the construction of an underground parking garage with 155 spaces, which will be used not only by the University, but also by the general public. The garage will be located under the building of the University’s sports and behavioural health centre. The City has also provided pre-financing for the project documentation and other related costs.

Another contribution by the City has been the relocation of the Černá Louka tram terminus and the Miniuni tourist attraction. Demolition work at the former terminus (behind the Antonín Dvořák Theatre) was completed in January 2020; trams will now terminate at the Hranečník terminus or the tram depot in Přívoz for a temporary period until a new city centre terminus is built near the Silesian Ostrava castle (project documentation is currently being compiled). The nearby “Výstaviště” tram stop will remain in use in both directions.

Miniuni (a popular family tourist attraction featuring miniature outdoor replicas of some of the world’s most iconic buildings) will be relocated to a site near the Silesian Ostrava castle. The new site offers space for 15 of the original 30 replicas, which will undergo a complete restoration before being installed in their new home; a further 5 replicas will be added at a later date. The relocated Miniuni will also feature a restorers’ workshop, new seating areas and other visitor facilities.

The City is currently planning wide-ranging changes in the transport infrastructure serving this part of the city centre. The goal is to create efficient connections between important institutions in the area, enabling the remaining vacant sites to be built up while also continuing to implement significant improvements to the quality of public spaces. Major changes await the transport corridor running along the left bank of the Ostravice River, which will separate the new university campus from the waterfront. An architectural study has been commissioned by the City of Ostrava, and documentation is currently being drawn up for the necessary land use decision. The alterations will include traffic calming measures and the creation of zones for cyclists and pedestrians. The new route will no longer act as a physical barrier between the sports, recreation and cultural complex at the University campus and the waterfront – instead it will create a natural point of connection between these two zones, generating new opportunities for people to enjoy the beauty of the riverside area. 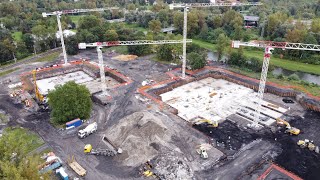 Link
… previous information on the project

A project for the cluster and the proposed new building has been compiled and was submitted to the Ministry of Education in June 2019. The project will be funded via EU programmes, which have provided the University with more than 1 billion CZK from the Operational Programme Research, Development and Education (specifically the call channelling funds to structurally disadvantaged regions in order to assist their further development). The funding requires just 5% of the total project costs to be paid from the applicant’s own resources.

As part of the project to create a new university sports centre, the University of Ostrava’s Department of Architecture contacted its sister institution the VŠB-Technical University, which has close links to the architect Roman Kuba from the Simona studio. For the exterior of the new art and design cluster building at the Faculty of Fine Arts and Music, the University contacted the renowned Kopřivnice-based architect Kamil Mrva – who is also closely associated with the region, being especially well-known for his buildings in the Beskydy mountains. The plans for the major new sports centre are being coordinated by the Department of Human Movement Studies at the Faculty of Education; the Department will be based at the centre. All the facilities to be built at the new complex will be fully open for the general public to use.

The University of Ostrava’s new sport, health and technology complex will provide premises for the Department of Human Movement Studies. It will also include an indoor sports hall. Modern facilities built to an excellent standard play an important role in attracting talented young sports stars who have the potential to strengthen the region’s reputation as a hotbed of sport – as well as stemming the flow of young people away from the region. The outdoor parts of the complex will also be able to serve as venues for various cultural and community events.

The new building for the art and design cluster will incorporate facilities for the music section and the design section of the University’s Faculty of Fine Arts and Music; their current facilities are entirely unsuitable for purpose. The project will create a new digital technology and design centre, a multimedia teaching suite, over 40 specialist teaching and rehearsal rooms, facilities for the opera studio, an auditorium for concerts, audio production and post-production equipment, and a specialist lab and teaching studio for music therapy. The building will also provide premises for the University’s DesignLab (exhibition spaces for international events) and its MusicLab (a chamber music venue that will likewise cater for an international public).

The construction of these two new university buildings is one of the largest investments of its type in the history of Czech higher education. The project will be financed from EU funding via the Operational Programme Research, Development and Education, which was launched in 2017 by the Czech Education Ministry. The Ministry has invested 720 million CZK, and the City of Ostrava is contributing over 156 million CZK. The Moravian-Silesian Region has contributed 14 million CZK for the preparation of project documentation, and the University of Ostrava itself has invested 4 million CZK.