The IT4Inovations National Supercomputing Centre was created by the VŠB-Technical University of Ostrava. Its mission is to conduct top-quality research in the field of highly complex computing and data analysis as well as operating the Czech Republic’s premier supercomputer infrastructure, ensuring that the technology is used efficiently and effectively in order to boost the competitiveness and innovative potential of Czech research and industry. The key goal of IT4Innovations is to be a leading centre for supercomputing offering professional services and carrying out ground-breaking research in the field of computing and big data processing in order to benefit academia, industry and society as a whole. In order to keep step with the world’s richest countries, it is essential for IT4Innovations to receive constant funding and support for the ongoing modernization of its research infrastructure. 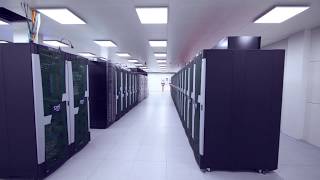 The IT4Innovations National Supercomputing Centre is a part of the VŠB-Technical University of Ostrava. Its first supercomputer – named Anselm – was installed in temporary containers in May 2013; its power is 94 TFLOPs. The next supercomputer – Salomon – began operating in July 2015, when it was the 40th most powerful computer in the world. Since the summer of 2015 both supercomputers have been located in a brand-new building on the university’s campus in Poruba.

IT4Innovations also conducts cutting-edge IT research in the field of high-performance computing (HPC). Its research teams have strong international links; since its foundation in 2011, IT4Innovations has been part of the prestigious Europe-wide research infrastructure PRACE (Partnership for Advanced Computing in Europe), representing the Czech Republic in this infrastructure. Since 2016 it has also been involved in the European Technology Platform in the area of High-Performance Computing (ETP4HPC), which defines key research priorities for supercomputing in Europe.

IT4Innovations was created mainly thanks to European Union funding; it received around 1.8 billion CZK from the Operational Programme Research and Development for Innovation. The IT4Innovations Centre of Excellence operated from 2011 to 2015 and involved five partners: the VŠB-Technical University of Ostrava, the University of Ostrava, the Silesian University (Opava), the Brno University of Technology, and the Institute of Geonics (Czech Academy of Sciences). These partners are currently continuing their collaboration as part of the IT4Innovations project “Excellence in Science” (within the National Sustainability Programme II), which supports top-quality research in supercomputing and embedded systems.

At present, IT4Innovations runs three supercomputers: Karolina, Barbora, and the specialised NVIDIA DGX-2 system for artificial intelligence computation. The Karolina supercomputer, acquired as part of the EuroHPC Joint Undertaking, was the most powerful supercomputer in the Czech Republic on the year of its installation, 69th in the world (on the TOP500 list), and ranked 8th in the Green500 ranking of the most energy-efficient supercomputers.

Source (information and photographs): IT4Innovations and VŠB-Technical University of Ostrava