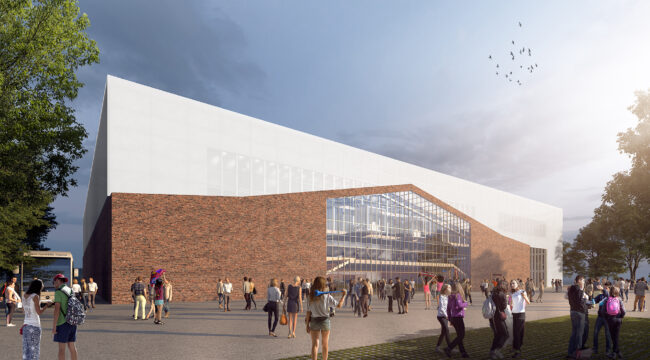 Preparations continue for the construction of a new multifunctional sports hall

A new multifunctional hall for sports and cultural events will be created on the site of a former bus depot in Ostrava’s Fifejdy district. The design by the Platforma architekti studio will incorporate part of the original depot, integrating the site’s historic industrial architecture with modern features. The hall will be built and operated by the Association for the Support of Sport, Children and Young People (below simply referred to as the Association) – a consortium whose members are the City of Ostrava, the Moravian-Silesian Region and the bus company ČSAD Ostrava. Construction work is set to begin in 2022.

Andrea Hoffmannová, Ostrava’s Deputy Mayor with responsibility for education and sport, gave more details: “For many years the City has needed a multifunctional sports hall with a capacity of at least three thousand spectators. This is a strategic project that forms part of our action plan for sport. When seeking out the best location, we needed a site that offered easy access and met the needs of sports clubs and the general public. The former bus depot in Fifejdy (at U stadionu St.) was suitable for several reasons: good access, sufficient space to build a hall of the required size, and synergies with other infrastructure. We are pleased that the project will involve a partnership between the public and private sectors, and that the current depot building will be revitalized. The private-sector partner will not only make an important contribution to the construction of the new hall; the company will also be involved in the day-to-day management of the hall, which will not represent a burden on the City’s finances.”

The Platforma architekti studio was commissioned by the Association to produce a final design for the new multifunctional hall, which will have a capacity of up to 3 500 spectators. The hall will mainly be used for training and matches of basketball, volleyball, floorball and handball clubs. Besides the main building, the complex will also include training facilities for ball sports, a fitness hall and gym, a gymnastics hall, and full changing facilities.

The new hall will be located on the site of a former bus depot in U stadionu St. The private-sector partner ČSAD Ostrava (a member of the OSTRA Group) will contribute the land and the existing depot building. The structural and architectural design will incorporate the perimeter walls of the former depot and warehouse. The hall will feature a reinforced concrete structural skeleton, enabling the layout of the interior (both the main hall and the training facilities) to be flexible. The interior will comprise structural modules of various sizes depending on their intended function, which will be integrated into the preserved elements of the original building. The main hall (comprising the playing area and the spectator seating) will be very open and spacious, with glass partitions offering clear sight-lines that will link the individual interior sections together to create the impression of a single unified space. The raised ground-floor level of the hall will contain two training halls (for basketball and volleyball), and the upper floor will have a floorball hall and a gymnastics centre with all necessary technical facilities.

David Průša from the Platforma architekti studio described the principles that guided the design: “The current depot hall has a clear, strong character, with a striking open brickwork façade. We didn’t want it to be completely forgotten, so we decided to retain the existing hall and add a modern module-based structural solution to it. We’ve designed “a hall within a hall”. The original and new features fit together well, using the same materials and heights.”

The main hall forms the core of the complex, with the training hall complementing it. The training hall is conceived along vertical lines, enabling the maximum possible use to be made of the built-up area. It is linked to the main hall by a transparent-walled corridor. The outdoor area between the two halls is a public space featuring tall trees and park furniture.

The Association for the Support of Sport, Children and Young People is a consortium bringing together partners from the public and private sectors. It began its work in January of this year. The final design proposal will now be discussed by the members of the Association and used as a basis for a public tender to choose the building contractor and to finalize the precise construction costs. The total estimated costs of the new buildings and the reconstruction work are over 500 million CZK. Construction work is expected to begin in 2022, and the hall should be opened two years later, in 2024.

Tomáš Vrátný from the OSTRA Group (to which ČSAD Ostrava belongs) summed up the benefits of the project: “Ostrava deserves a new hall, and I’m delighted that the OSTRA Group can be a part of this project. The main benefit of the project is that it will create a hall with truly international parameters, accompanied by excellent training facilities that will be used by children and young people. The new sports complex will be multifunctional – it will be used for various different sports, and it will serve not only top-class teams, but also recreational sport.”