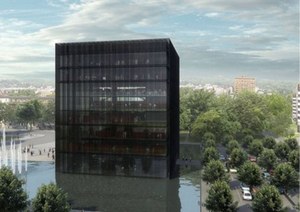 The design for the new Moravian-Silesian Research Library (known as the “Black Cube”) dates back 15 years, and it has evolved through a number of phases since it was first presented. The first setback came when the Czech government pulled out of an agreement to co-finance the construction work; this delayed the project for several years. Then, the Moravian-Silesian Region decided to shelve the “Black Cube” project and considered other options instead. Another turning-point came in 2018, with a return to the original design and the signature of a memorandum of co-financing by the Region, the national government and the City of Ostrava. So, how has the project progressed since then?

The current situation was presented to the public on 15 September by representatives of the Moravian-Silesian Region along with one of the architects Ladislav Kuba, at a debate held in Ostrava’s Plato Gallery.

Besides providing a home for the entire stocks of the Moravian-Silesian Research Gallery, the Black Cube will also facilitate the complete cultural digitalization of the region – a goal expressed in the slogan “from coal mining to data mining”, which aptly sums up the region’s transformation from a centre of heavy industry to a modern economy and society.

The library is operated by the Moravian-Silesian Region, which is currently attempting to access funding from the Just Transformation Fund – a resource available to regions that have been hit hard by the closure of coal mines and the associated economic transition. The expected costs of building are 2 billion CZK. 85% of the planned project costs will be covered by the Transformation Fund; the remainder will be funded jointly by the Region and the City of Ostrava.

The Black Cube will in fact be a green library: it will be over 80% self-sufficient in energy, using a system of underground pumps for heating. It will also be highly efficient in its use of rainwater, its smart lighting systems, and its paperless operations.

The new library will be a hugely important hub for education and digitalization, benefiting not only the Moravian-Silesian Region but also neighbouring regions. It will have close links with other European centres, enabling it to become one of Europe’s top libraries. Besides digitalizing its current stocks, it will also provide digitalization services for other regional libraries, museums, and companies.

Although the exterior of the building has hardly changed since the original project was unveiled 15 years ago, the interiors have been completely redesigned. There are fewer offices, fewer books on open display, and more study space. There is also a digitalization centre – the Maker Space, which will enable users to work with robots and virtual reality – as well as a computer teaching room, an art-house cinema and a recording studio.

If everything goes to plan, the subsidy programme should be launched next year, and the Black Cube project will be able to move into the construction phase.

More information about the project HERE.