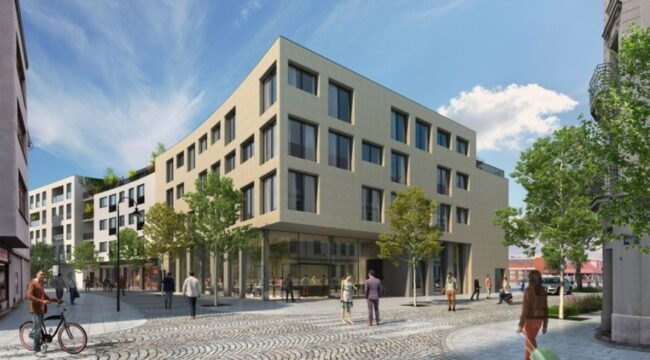 At a recent session, Ostrava’s City Assembly approved the plans to sell real estate with a total area of 3 747 m2 in the city centre, bounded by Porážková, Stodolní and Masná Streets. The plans can be viewed in detail on the City’s official noticeboard or at its real estate website https://pozemky.ostrava.cz/. The deadline for submitting bids is 30 November of this year.

The “Rezidence Stodolní” complex is located in Ostrava’s historic core, within the central urban heritage zone. It was built in 1927-1928. The entire surrounding area is undergoing a wide-ranging process of revitalization with the aim of creating a fully-fledged new urban quarter centred around the modern art gallery currently being created at the former city slaughterhouse complex. Besides this cultural hub, the new quarter will also incorporate a complete range of urban functions, including residential units, office premises and services.

The residential complex will be directly adjacent to the former slaughterhouse complex. It will be bounded by Masná Street, which the City plans to extend up to the junction with Janáčkova Street during 2022 and which will eventually be flanked by rows of new apartment buildings. The first of these buildings, a seven-floor City-owned structure at the junction of Janáčkova and Masná Streets, was completed in June 2021. The planned “Rezidence Stodolní” complex will front directly onto Stodolní Street, one of Ostrava’s most important pedestrian zones and a vibrant hub for culture and entertainment. There will also be excellent access to the city’s core public transport network.

Ostrava’s Mayor Tomáš Macura explained the City’s role in the project: “In the past, the City acquired several plots of land in the area. Our aim was to merge the plots in order to create a single large site under our ownership, enabling us to steer the development of this prime city-centre location and to integrate it with other projects being implemented nearby. One result of our efforts in this part of the city centre can already be seen – the revitalization of the historic former city slaughterhouse. In the past, we were also considering whether to use the land as a site for a municipal multi-genre cultural centre, but this idea was then partially adopted by the private project ‘Ostrava 2020’, and moreover the City’s cultural infrastructure priorities shifted substantially, so we eventually abandoned the idea. Now the land offers an ideal opportunity for a different type of development involving private capital.”

The City now plans to sell the site en bloc so that it can undergo a complete reconstruction (with the addition of new structures if appropriate) in order to perform functions that will enhance the area and complement other planned developments nearby. The entire development will be fully in accordance with the regulating conditions drawn up by Ostrava’s Municipal Studio for Urban Planning and Architecture (MAPPA).

Zuzana Bajgarová, Ostrava’s Deputy Mayor with responsibility for investments, gave more details: “The buildings currently on the site are in a poor technical condition, and they are completely disused. Preliminary discussions with potential investors have shown that there is considerable interest in the site, so by announcing our plans to sell the site we are giving investors the opportunity to submit official bids. Besides the regulating conditions drawn up by MAPPA, other key criteria for the winning bid will be the overall functionality of the planned development and its synergy with the surrounding area – which is currently undergoing a major transformation. We have deliberately left the requirements quite loose with regard to the future functions of the site, because we do not want to restrict investors too much at this stage.”

Each bid must contain a description of the planned development, including specific details of its functions, a description of how it will benefit the surrounding area going forward, the appropriateness of the plans in terms of urban planning, architecture, transportation and functionality, the planned date of completion, and of course also the bid price.

The minimum bid price has been set at 23 638 760 CZK on the basis of an expert valuation. However, the City expects that the actual bids will be higher, as the location is potentially very lucrative.

Bidders must also take into consideration that the land between the north-west boundary of the site and the historic slaughterhouse complex is reserved for a planned pedestrian/cycle bridge crossing Místecká Street and the railway line, which will link the City Hospital with the area around Porážková, Masná, Janáčkova, Pobialova and Stodolní Streets.

Interested parties may decide that they want to incorporate this bridge into their development plans by creating direct connections to it. If this is the case, the eastern end of the bridge will be located in Masná Street or Stodolní Street, and it will offer uninterrupted access for members of the public.