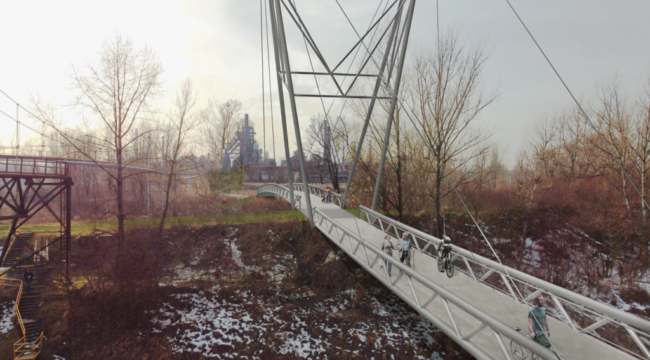 There are plans to create a new link for cyclists and pedestrians between Ostrava’s city centre and the Lower Vítkovice national cultural monument complex. A new bridge will be built connecting the right (east) bank of the Ostravice River with the Lower Vítkovice complex on the left (west) bank, providing safe and fast access for both pedestrians and cyclists. The bridge, designed by the architect Josef Pleskot, is one of Ostrava’s key strategic projects, and construction is scheduled for next year.

Kateřina Šebestová, the Deputy Mayor with responsibility for the environment, gave more details: “The new link between the city centre and Lower Vítkovice is hugely important for the development of Ostrava as a whole. The bridge will provide a pedestrian and cycle route from Lower Vítkovice to the footpath and cycle path on the opposite bank of the Ostravice River; this path runs southward from Landek (in the northern part of Ostrava) all the way to the Beskydy mountains. The new bridge will remove a major barrier to movement, enabling cyclists to reach Lower Vítkovice without having to travel along problematic sections of busy roads (such as Českobratrská St. or 28. října St.). This simple yet impressive bridge will be built to a design by the architect Josef Pleskot. The idea of building a bridge at this location (currently occupied by a disused former industrial pipeline behind the Lower Vítkovice Science and Technology Centre) dates back to 2016, and now this key part of our city’s cycling infrastructure is finally set to become a reality.”

The planned link route will be 550 metres long and 4 metres wide, providing easy access for pedestrians and cyclists crossing the river between the right bank and the Lower Vítkovice complex. The surface will be asphalt, making it suitable for in-line skating. The route will cross both the river and a railway siding near a waste water treatment plant, and it will end near the Science and Technology Centre on Vítkovická Street. The bridge will be made of steel and suspended from cables. In the future, the entire surrounding area will be further cultivated and revitalized.

Architect Josef Pleskot explained his vision of the bridge: “All my life, I have been committed to using architecture to create connections. Interconnecting disconnected places using various bridges represents the pinnacle of forward-thinking urban planning. If such a connection is successful and strong, both the connected places benefit from it – and the city flourishes! I’m convinced that building a bridge at this particular location will bring great benefits and added value to Ostrava – and open-minded users of the bridge will also enjoy the novel vistas it will create. The sophisticated, light suspended steel structure will give an impression of space and air, and it will be firmly in keeping with Ostrava’s spirit.”

Josef Pleskot has been involved in the Lower Vítkovice project since 2009. He not only designed the main structures at the complex (such as the Gong auditorium, the Science and Technology Centre, or the interactive U6 technical museum in a former power plant), but he is also responsible for the revitalization of a historic listed building at the former Hlubina coal mine, now transformed into the Heligonka music club. Pleskot’s other work in Lower Vítkovice includes the design for the Museum of Agriculture. The first stage in the bridge project was a spatial study, completed in 2020. This was followed by further preparatory work. The total contracted costs of drawing up the project documentation and the documentation for both the land use decision and the construction permit (including engineering work related to technical infrastructure) are 1.96 million CZK (excl. VAT). The construction of the bridge (including the path surfaces) is forecast to cost 60 million CZK (excl. VAT).

The new bridge forms part of Ostrava’s flagship project “Development of the area between Nová Karolina and Lower Vítkovice”, which is included in the City’s Strategic Development Plan (communicated to the public under the “fajnOVA” brand). The Lower Vítkovice complex is not only used for recreation; it also offers cultural and sporting facilities as well as being home to a number of companies. The area is expected to undergo further development in the future.