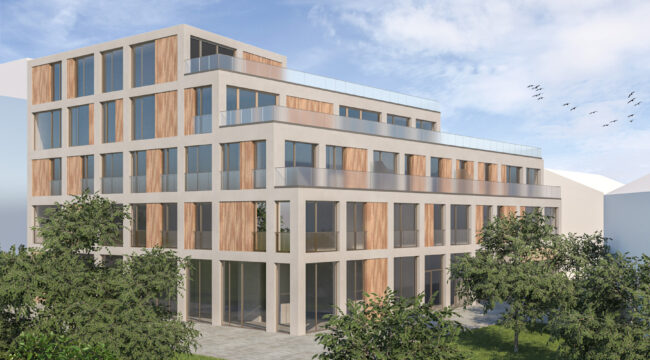 A new polyfunctional building is planned in Slezská Ostrava

At its first session in 2022, Ostrava’s City Assembly approved plans to sell land in Slezská Ostrava (Silesian Ostrava) located between U Staré elektrárny Street and Bohumínská Street, with a total area of 850 m². The developer UNNI Development gama s. r. o. plans to build a polyfunctional complex on the site, containing 11 apartments, a garage with 30 parking spaces, and two commercial units. The buyer will pay 5 406 000 for the site (with the standard VAT rate). Construction work must be completed no later than 31 March 2027.

The site is located in an area known as Zámostí. Formerly an attractive, densely built-up part of Slezská Ostrava, it suffered greatly during the second half of the 20th century due to insensitive development projects which destroyed the district’s historic core. Ostrava’s Mayor Tomáš Macura described the plans for the area:

“The Slezská Ostrava municipal district, together with the City and our Municipal Studio for Urban Planning and Architecture (MAPPA), is currently drawing up detailed conditions that will enable the quarter to undergo a process of development which will restore its original qualities and historical importance, while also taking into account how it has evolved during the intervening years. The key tasks will be the transformation of Bohumínská Street into a genuinely urban thoroughfare and the implementation of building projects on currently vacant lots. The first step in this process was the creation of an urban planning vision for the quarter, which MAPPA completed in the first half of 2020; this vision formed the basis for delineating precisely which areas are to be built on.”

MAPPA then drew up detailed regulating conditions for the entire quarter, which will ensure that the vision for the transformation of the area can become a reality. These conditions define precisely where buildings can be located on individual plots in order to create a coherent street line along Bohumínská Street. The conditions also stipulate precisely how high new buildings can be (in order to ensure that they are in harmony with the surrounding structures) as well as setting out the requirements for the use of street-level premises and parking facilities.

Richard Vereš, the Mayor of the Slezská Ostrava municipal district, explained the importance of the project: “The Zámostí quarter historically formed an integral part of the city centre. Building on vacant lots will help realize the vision of expanding the city inwards – and it will be the first step towards the revitalization of Slezská Ostrava’s central core. We are currently planning improvements at various public spaces in the vicinity – adding greenery along the busy artery of Bohumínská Street, making improvements at Yuri Gagarin Square, and creating three brand-new small squares.”

The investor has presented an architectural study detailing its plans to build an apartment block whose height and overall proportions will blend harmoniously with the existing structures in the vicinity. The block will have a green roof providing an area where its residents can relax – as well as helping to regulate the urban climate. There will be underground parking for residents and for visitors to the commercial units. The internal courtyard will also offer a place where residents can relax.

Urban planner Pavel Řihák from Ostrava’s Municipal Studio for Urban Planning and Architecture (MAPPA) praised the investor’s plans: “The design will represent a sensitive addition to the current urban fabric. It will blend in well with the size of the current buildings on U Staré elektrárny Street, and the design of its façades will be in keeping with modern requirements for an urban building. The plans are also in compliance with our regulating conditions. There will be two commercial units at street level, and the use of terraces will create a smooth transition in the height of the complex.”

Today’s decision by the City Assembly was preceded by a series of steps. In June of last year, the Assembly approved the City’s plans to sell the site. In September 2021, the Assembly of the Slezská Ostrava municipal district recommended the approval of the proposal to sell the site to UNNI Development gama s. r. o.

As part of the contract of sale, the investor has committed to apply for a land-use decision within 12 months of the contract becoming effective and to apply for the necessary construction permit within 24 months. Construction work must begin within 12 months after the construction permit enters into legal force. The contract of sale also contains a range of other stipulations to ensure that the investor will proceed in accordance with the intended purpose of the project – including contractual penalties if these stipulations are breached.

The City of Ostrava will draw up plans for the further development of the Zámostí quarter during this year. In January we will launch preparations for a major investment project to transform Bohumínská Street into a fully-fledged urban thoroughfare; this will improve transport links between the Moravian and Silesian sides of the Ostravice River (the left and right banks), as well as improve access to the Muglinov district for both pedestrians and cyclists, enhancing the overall quality of the public spaces along this major artery, building on currently vacant lots, and implementing traffic calming measures. The project will include direct comparisons between the practical viability of its various solutions and the former proposals to re-route Bohumínská Street underground.